Editor’s note: Steve Hoffman gives us a humorous look at how a trade show exhibit design shared by the Red and the Blue teams might go.  It’s a tongue-in-cheek blog post near the crazy crescendo of the billion dollars’ worth of presidential campaign ads.  We’re happy to share Steve’s take on the idea, with the caveat that this does not represent the views of Skyline or our dealers.  Enjoy!

With so many Americans paying attention to the recent debates, the Commission on Presidential Politics phoned to explore the possibility of my company quickly putting together a traveling display to be shared by President Obama and Governor Romney.  What follows is the transcript of the design discovery meeting:

Me:  I always like to start an ‘exhibit needs assessment’ meeting by understanding the ultimate goal for the exhibitor.  Can I ask you each to respond?

Me:  Neither of you spoke in terms of accomplishing anything for the American People?

Me:  With any exhibit environment we need to understand the message and communication needs as well as aesthetic and functional requirements.

Dem 2:  Functional?  You mean we have to do something?

Rep 2:  We make a point of always trying to look good to whomever we’re talking to at the time.

Me:  Well, let’s talk about YOUR messaging within your assigned areas of the booth.  Republicans, please tell me what you’d like to say about your candidate?

Rep 1:  President Obama has damaged our economy and our world standing.

Me:  Actually, what seems to work best in trade show marketing communications is to communicate the benefit of what you are trying to sell.

Rep 2:  Well then, I think on the Romney side of the booth we use a header saying something like “Put an end to Obama.”

Dem2:  And on the Obama graphics I think we need to say something like “Romney Thinks 47% of you are Losers.”

Rep 1:  Our strong belief is if we have a booth that appeals to the top 1% of earners, the trickle-down excitement of our campaign will benefit everyone else.  That’s how you grow a trade show audience, isn’t it?

Me:  Are there any particular types of exhibits you had in mind?

Rep 2:  Large, massive, imposing.  In fact, let’s go even bigger than the campaign generals are asking for.  There’s a certain strength in having more than you need.

Dem 2:  Actually, since this exhibit is sure to draw a crowd anyway, we were thinking of turning over some of the space to the Chinese, the Sierra Club and a resurgent General Motors.

Me:  Maybe we should move the discussion to making sure we address all of the booth’s functional considerations.  So, I’ll just name a topic and each of comment on your needs.  Let’s start with Budget for the project.

Dem 1:  Budget, well we’ve had some delays completing one.

Me:  Well then, can you tell me how much you have to invest in the project and where that money is coming from?

Rep 1:  Even when we did a display in Democratic leaning Massachusetts, it reached across the aisle and was balanced.

Dem 2:  Can’t we design this thing from the middle out?

Me:  Let’s move on then, to who will be setting up the booth?

Dem 1:  We’re very pleased that many fine jobs will be saved by our inevitable decision to make sure this booth requires Union Labor wherever it is set up.

Rep 1:  They are wrong about that.  Now, in the past when we’ve done booths in cities requiring unions we’ve said it’s a good thing but when thinking about something to share with the nation let me remind you that America was built on self-reliance.  Nobody helps set up trade show displays inside a Staples store.

Dem 2:  What’s important to us is that everyone has an equal, fair playing field if they want to set up the booth.

Me:  What about furniture in the booth?

Me:  Have you given any thought to your storage needs?

Dem 2:  On our side of the booth we need lots and lots of room for giveaways.

Rep 1:  We’d rather not focus on giveaways, unless of course it’s to people who really don’t need it.

Me:  Another functional concern is the extent you need graphic re-configurability?

Rep 2:  Having the ability to change our message based on who we’re talking to and what they want to hear is very important.

Dem 1:  President Obama’s message is clear…but maybe we can add some lighting effects to keep some things in the shadows and brighten how it’s perceived?

Me:  Gentlemen, let’s talk production timeline.  Once we present a workable exhibit solution how quickly do you think both parties can agree?

The meeting was adjourned.  Nothing happened. The doodle sketch my designer made during the meeting looked a lot like Washington, D.C. 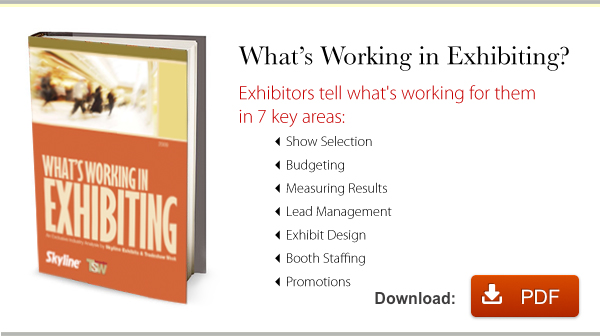 About the Author: Steve Hoffman, President of Skyline Exhibits & Design, Inc. has spent almost 30 years in the selling and marketing of marketing products. Following a successful career in the TV Program Syndication business, he joined The Holt Group/Skyline Displays as a Marketing Consultant, then moved into management, ultimately purchasing a portion of that company. He is the author of "The Reality of B.S. (Big Sales...That Is)." Steve is dedicated to helping his South Carolina trade show displays clients achieve their worldwide exhibit marketing goals while improving their efficiencies, too.

Join 170,000+ exhibitors who has profited from our insights